March 21, 2013
A Gweru man recently went berserk, bashed his wife and even threatened to stab her with a knife after she reportedly refused to teach him how to open and use a Facebook account. 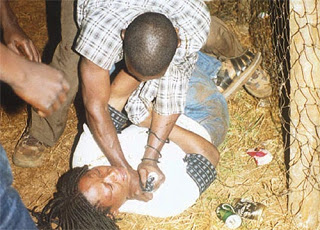 The man, Benjamin Chanyau of 1242 Mkoba Village 18, appeared before Gweru magistrate Ms Sithandekile Ncube facing charges of domestic violence. He was found guilty of assaulting his wife, Ms Fadzai Muchavhaira and fined US$200 or in default one month imprisonment.

The State’s case as presented by Mr Bonwell Balamanja is that on 21 February, the complainant, Ms Muchavhaira was taught how to open and operate a Facebook account by her brother at the couple’s house in Mkoba Village 18 in the presence of the accused
click below to continue reading
.

The wife refused to comply leading to a misunderstanding between the two. Chinyau got furious and kicked the complainant in the stomach once with a booted foot. He reportedly went on the threaten to stab his wife with a knife is she failed to show him what was on her Facebook wall and teach him how to use Facebook.

The complainant reported the matter to the police leading to the wife-basher’s arrest.
entertainment