Showing posts from September, 2014
Show all

September 29, 2014
All soccer fans love the champions league No doubt, it is the biggest club football competition in the world. It is happening again tomorrow and next. click HERE to create a free account on bet9ja HERE is the catch today predict correctly either  win,draw or lost  for the below European champions league and win a free recharge card of you choice Manchester City - AS Roma Arsenal FC - Galatasaray Bayer Leverkusen - Benfica Lisbon Atletico Madrid - Juventus Apoel Nicosia - Ajax Amsterdam if you predict correctly you win a recharge,if you did not you are developing your prediction skills Either way you win...its better than not giving it a trial at all Whatever you do, make sure you make money for yourself this week register and get 20% bonus on your first deposit on bet9ja
1 comment
continue reading »

INSPIRING: Meet Body Builder With No Arms, Yet Sends Messages, Drives And Applies Make Up With Her Feet(Photos) 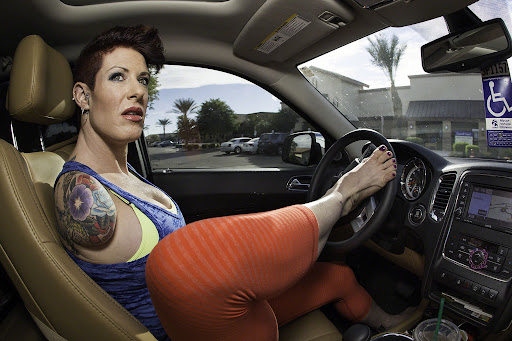 She also does everyday stuff with her feet - such as driving Meet Barbie Thomas the incredible armless female body builder who is inspiring America, and the whole world at large. The 37-year-old lost both her arms during a horrific electrical accident as a toddler - but that hasn't stopped her from pursuing her bodybuilding dream. This amazing lady says she can do anything an average person can do - except she uses her feet. That includes brushing her teeth, making dinner, taking milk out of the fridge, texting, shopping, putting on makeup and even driving. The competitive mother-of-two was given an emotional standing ovation by competitors and spectators at the NPC Junior USA Bodybuilding Championship, South Carolina. She said:   "I'd say to anyone, you can do whatever you put your mind to. "The only limitations are the ones you put on yourself. Everyone has limitations and handicaps in some way or another - mine are more
6 comments
continue reading »

Want 50k a week shortcut ? Run a sport betting shop as an agent ! (Help inside)

Most people out there are taking the long route to making money! looking for jobs around when you can actually start something on your own and make money in 6 months than those who have been working in a bank for the past 5 years Example of one such business is  to run a sports betting shop..infact you can classify it as one of the best the business of 2104 And it's not about research! I am in business too! I have 5 shops right now and working on 3 more which will start operation in the next few weeks! The Good thing about the business is, you are guaranteed a weekly profit! You don't need many adverts since its all about sport that people love already My friend dayo wrote on his blog www.dayo.com.ng : Starting and running online sports betting business is like running any other business, you need to be able to answer the following questions: How much will it cost me to set up? How much will it cost me to run the business and how do I manage these costs.?
85 comments
continue reading »

Why some people may never make any money !!! (what you need to do to make money )

Im not sorry to say this but we have a lot of dull guys out there ! short sighted people  and annoying part of it all is that they think they know something, they think they are wise ! And realy they know nothing ! absolutely nothing ! See as a young guy,its important for you to be optimistic and take opportunity and new ideas as crucial as possible to your development as a person . For example, i am young guy of early 30, i consider myself a lucky guy. Never wrote an application letter for a job in my life ! EVER ! i got hired right from my youth service (Thanks to my boss) i am a product manager managing one of the hotest product in one of the biggest  sport betting company in Nigeria today, in just 1 years and some months i have achieved a lot as a person This happened to me not entirely on luck, thanks to my optimism,my foresight and my hardwork if you are hardworking,depend on luck and not optimistic,its hard to go far, as a person i have nobody to help me but when i
2 comments
continue reading »

AP Powerball winner Gloria C. Mackenzie, 84, leaves the lottery office escorted by her son Scott Mackenzie, right, after claiming a single lump-sum payment of about $370.9 million before taxes on Wednesday, June 5, 2013, in Tallahassee, Fla. On Wednesday afternoon, the winner of the largest sole jackpot in U.S. lottery history stepped forward to claim her winnings. Gloria C. Mackenzie, 84, bought the winning $590.5 million ticket at a Publix supermarket in Zephyrhills, Florida. Mackenzie will take a lump-sum pretax payout of $370 million. And while the odds of winning that much money are steep -- 1 in 172.5 million in this case, according to one estimate -- it's not uncommon for people to come into a sudden windfall, such as an inheritance. We won't presume to begin to tell Ms. Mackenzie what she should do with her winnings, but she might want to consider these first steps, compiled for DailyFinance by financial expert Lynette Khalfani-Cox
Post a Comment
continue reading »
More posts