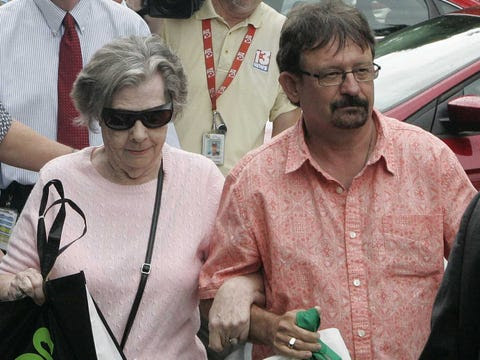 AP
Powerball winner Gloria C. Mackenzie, 84, leaves the lottery office escorted by her son Scott Mackenzie, right, after claiming a single lump-sum payment of about $370.9 million before taxes on Wednesday, June 5, 2013, in Tallahassee, Fla.
On Wednesday afternoon, the winner of the largest sole jackpot in U.S. lottery history stepped forward to claim her winnings. Gloria C. Mackenzie, 84, bought the winning $590.5 million ticket at a Publix supermarket in Zephyrhills, Florida.

Mackenzie will take a lump-sum pretax payout of $370 million. And while the odds of winning that much money are steep -- 1 in 172.5 million in this case, according to one estimate -- it's not uncommon for people to come into a sudden windfall, such as an inheritance.

We won't presume to begin to tell Ms. Mackenzie what she should do with her winnings, but she might want to consider these first steps, compiled for DailyFinance by financial expert Lynette Khalfani-Cox.

1. Do Nothing for a While

If you get a particularly large windfall -- like a six or seven-figure payout -- you might be tempted to take major steps, such as making a very expensive purchase, offering a huge donation to your favorite charity, or even investing a large portion of money in the stock market.

But experts warn against hastily doing anything with a financial windfall. Instead, take at least a few weeks, preferably even a few months, before making any significant economic decisions.

"Don't make any life changing decisions for at least the first six months such as quitting your job or moving," recommends Mark Cortazzo, a Certified Financial Planner and founder of MACRO Consulting Group in Parsippany, N.J. He adds: "Don't spend more than 10% of the total lump sum in the first 12 months."

But that's not to say you can't have fun -- just do it in moderation.

2. Enjoy Yourself -- Within Reasonable Boundaries

Diahann Lassus is a Certified Financial Planner and the president and co-founder of Lassus Wherley, a fee-only wealth management firm headquartered in New Providence, N.J.

She thinks it's a bad idea for windfall recipients to put themselves into a financial straitjacket and never enjoy the money. Instead, she says: "Plan on taking some percent of it, maybe up to 5% or so depending on the size of the windfall, and then just go out and have fun to get that out of your system."

Afterwards, Lassus says, you should get serious thinking about the longer-term opportunities your windfall could provide.

3. Put Your Financial Windfall Into Perspective

Once you have your fun with a windfall, it's time to put your newly acquired money into perspective. "People often think, 'I'm getting all this money and I'm going to be rich,' but that's often not the case," Lassus says.

So consider this question: How much money are you really working with? For example: #10,000,000 is a huge sum of money, but it's a far cry from #50 million. The latter would be enough for most people to retire on quite comfortably. But depending on your age, personal goals and current levels of savings and debt, #10,000,000 might not be a sufficient nest egg to ensure a secure retirement.

Whatever the case, you should also think about what you want the money to do for you.

"Will it pay for your kids' education, pay down your mortgage, or pay for next year's vacation?" Lassus asks. Bottom line: consider what are the critical goals you have, and determine how the money can help you meet those goals.

When big money comes your way, it's easy to focus on one aspect of the money: how to spend it. But you should also think about where you'll keep it. Experts say it's best to separate it from all your other accounts -- especially your checking account.

"Get it out of your checking account and put it into a special savings or brokerage account so that it's treated separated," Lassus says, "because we all know what happens to our checking account dollars. That money kind of goes into a black hole and gets more quickly spent."

5. Get Professional Tax and Financial Advice

Numerous financial complexities will likely come into play if you're the recipient of a large financial windfall: everything from gift taxes to income taxes, estate issues and more. Therefore, it's definitely advisable to seek out some professional advice concerning properly accounting for your cash, managing it wisely and using it to build wealth.

You may need to establish a trust, secure special type of life insurance, or perhaps get basic documents like a will created to make sure your beneficiaries are provided for in the event of your death.

For all these reasons and more,

if you get a windfall don't be penny wise and pound foolish, and mistakenly think that it would be a "waste" of money to hire a qualified CFP or financial adviser for help and advice.

"Be aware of the tax impacts of all large transactions," says Cortazzo, the Parsippany, N.J., CFP. "What you have in gross nairas and what you net after taxes can be a very different number," he adds, "and if you are budgeting based on gross amount, there can be a big shock when the tax bill comes due."

6. Put a Buffer Between You and Family/Friends

Lastly, try to avoid becoming a human ATM machine for those around you.

As anyone who has come into sudden wealth can attest, the act of receiving a huge pile of money often leads to requests for financial gifts or "loans" from needy family members and friends -- including some relatives you didn't even know you had.

Because many of us don't know how to establish financial boundaries with relatives and friends, it can be emotionally taxing to deal with requests for money, especially those that come with hard luck tales or sad sob stories about how another person got into a financial bind. (Just ask Sharon Tirabassi.)

Still, it's important for windfall recipients to shield themselves from a constant stream of people requesting handouts. Otherwise, your kindness can be exploited. You may wind up making unwise economic choices due to your own feelings of guilt, or due to the emotional pressure and manipulation exerted by others. Either way, you may later resent your generosity, feeling that you squandered money by giving it away so freely.

One way to avoid this problem is to have a trusted third-party serve as an intermediary to handle all requests for money. This person can be a close, responsible family member, or a neutral, financial adviser who can offer you some perspective.

Winning money, inheriting assets or somehow reaping a big financial windfall can seem like a dream come true. But if the money is too quickly spent or is just flat-out mismanaged, even hitting a multi-million Naira lotto or sportbetting cash can become a bittersweet event.