Showing posts from June, 2015
Show all

top lottery story around the world ! 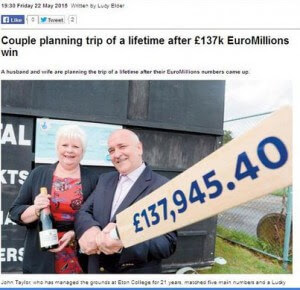 In this week’s top stories, a thoughtful daughter was all a mom needed to be a millionaire and a Canadian woman can now afford to extend her maternity leave after a million dollar lotto win. A British college employee decides to go on a dream trip with his wife after snagging a £137,000 win, and another Brit who won a huge £8 million prize thinks the win is ‘lovely’. Daughter’s Mother’s Day Gift Makes Mom A Millionaire Priti Shah’s daughter made her a millionaire for Mother’s day, and she did not even have to spend much.  One of three lottery tickets Shah received bagged the $4 million top prize.  Now she is set to receive $200,000 for the next 20 years. Couple To Take Dream Trip After £137K Win Eton College employee John Taylor knew what he wanted to do when he found he had £9.70 in his online lotto account – play some more.  That decision is now set to make life a lot easier for him and his wife Jenny. Soon after the the draw he received an email advising of a
Post a Comment
continue reading »
More posts