INSPIRING: Meet Body Builder With No Arms, Yet Sends Messages, Drives And Applies Make Up With Her Feet(Photos) She also does everyday stuff with her feet - such as driving
Meet Barbie Thomas the incredible armless female body builder who is inspiring America, and the whole world at large.
The 37-year-old lost both her arms during a horrific electrical accident as a toddler - but that hasn't stopped her from pursuing her bodybuilding dream.
This amazing lady says she can do anything an average person can do - except she uses her feet.
That includes brushing her teeth, making dinner, taking milk out of the fridge, texting, shopping, putting on makeup and even driving. 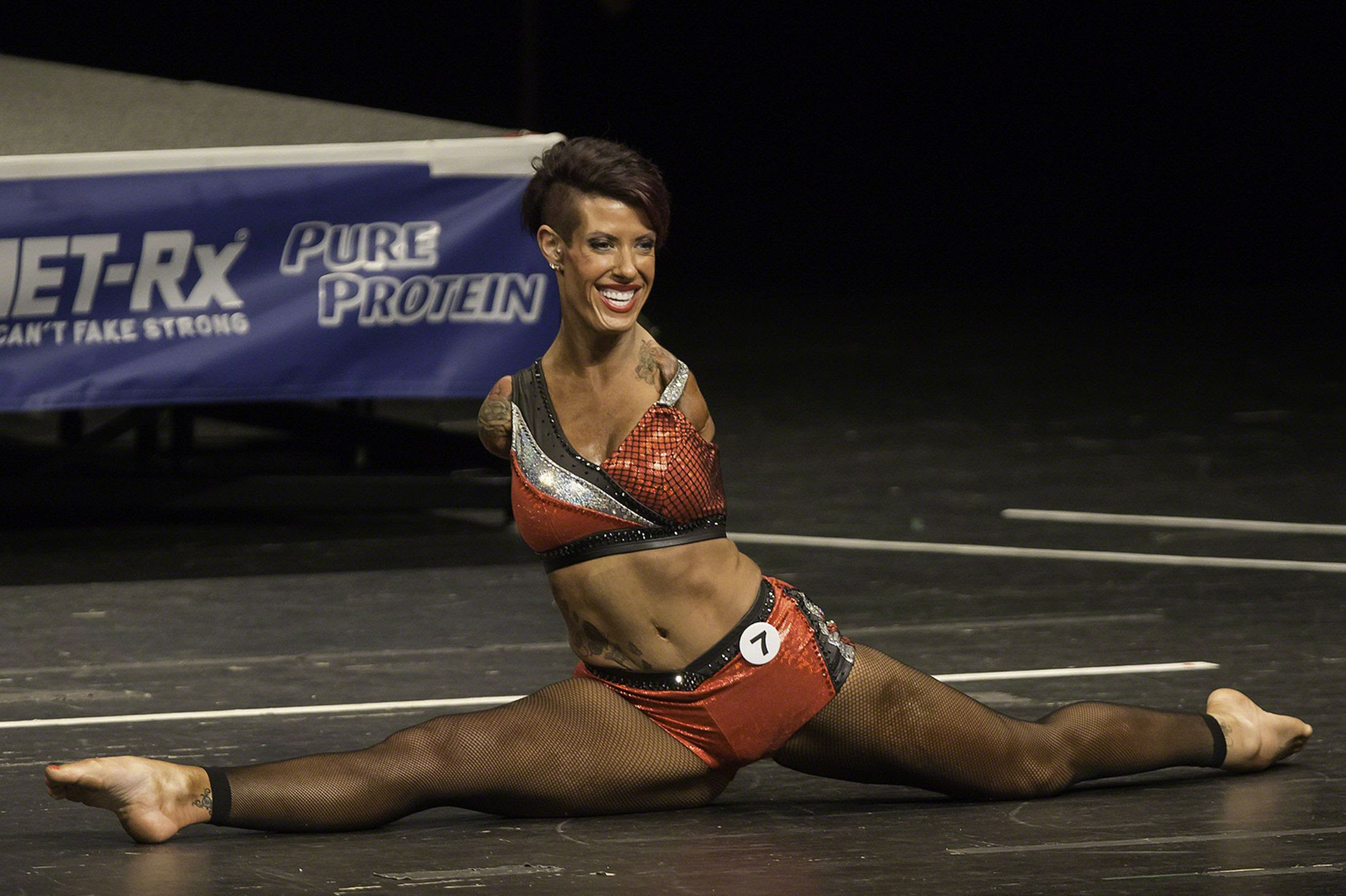 The competitive mother-of-two was given an emotional standing ovation by competitors and spectators at the NPC Junior USA Bodybuilding Championship, South Carolina.
She said:


"I'd say to anyone, you can do whatever you put your mind to.
"The only limitations are the ones you put on yourself. Everyone has limitations and handicaps in some way or another - mine are more visible than yours maybe."

Barbie - who has been married three times - began bodybuilding back in 2003.


"I used to read about all the fitness competitors in magazines - and I thought that was the coolest thing ever. I wanted to be like them and do the things they were doing. I thought it was amazing." 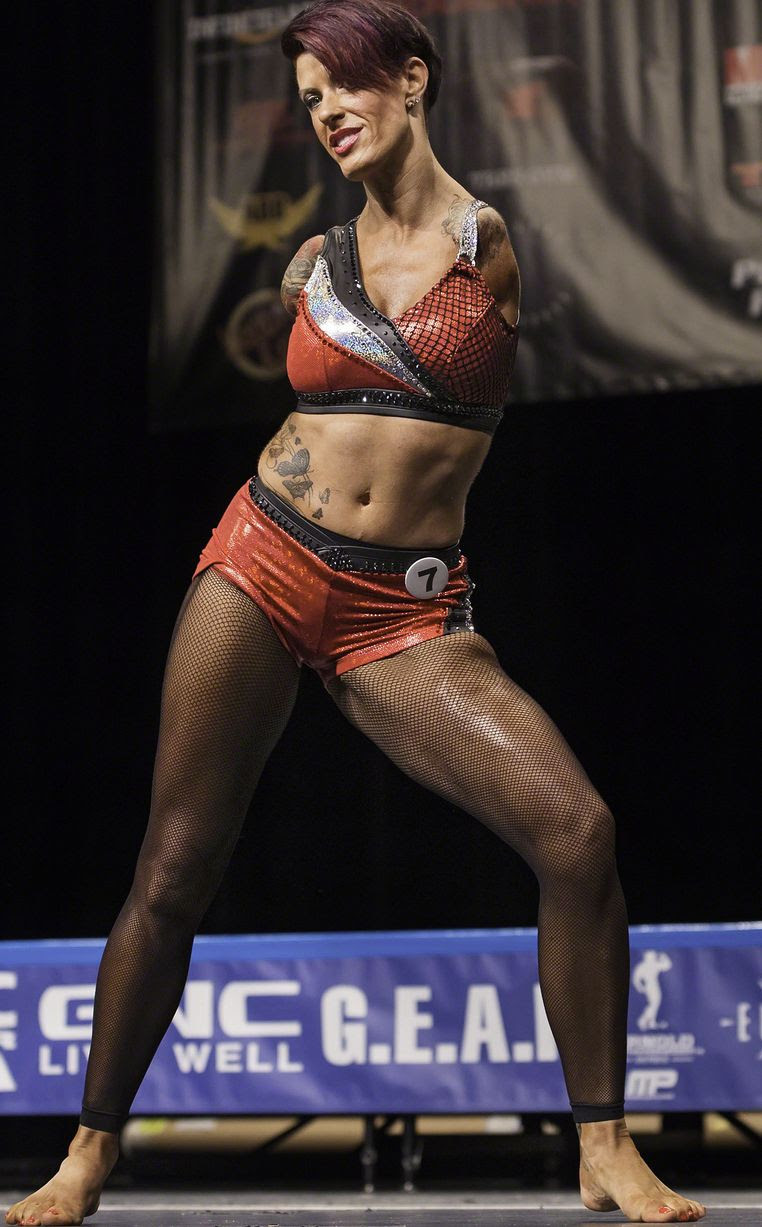 She decided to take the plunge into the sport after years of doubting herself and wondering if she'd even qualify because she didn't have arms to do the competition mandatories: "I finally called the locale chairperson and talked to him about it; and he gave me the green light.
"So in 2003 I entered my first fitness competition and loved it. Now it's in my blood and I can't live without it."

Barbie Thomas lost her arms when she was two years old. She climbed onto an electrical transformer and grabbed the wires. The electricity entered her hands and surged through her body - scorching her arms down to the bone and turning them into something 'like charcoal'. 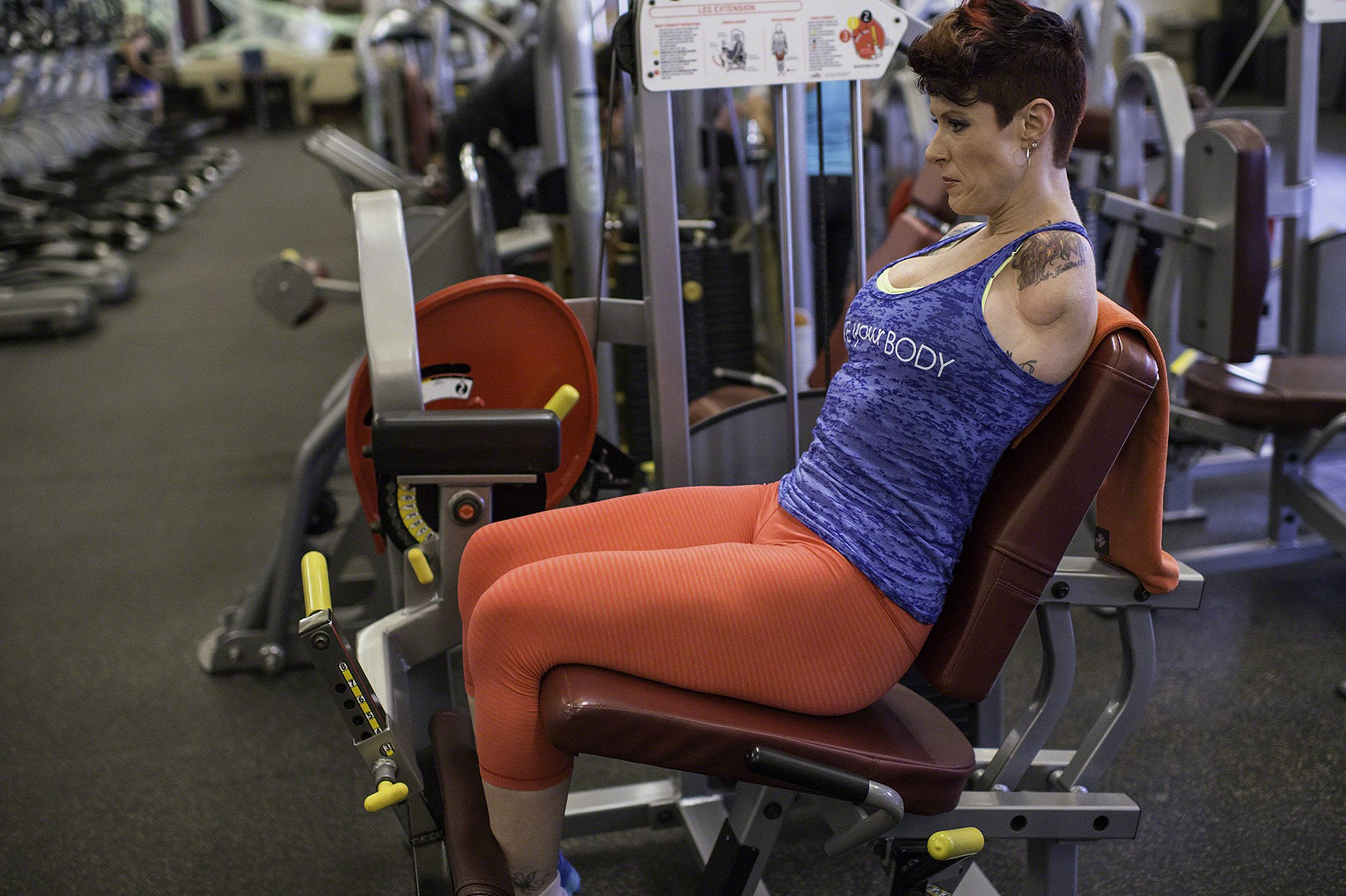 "The doctor said I wouldn't live - and if I did live, I'd probably be a vegetable," she said.
"But God had a different plan for me; I'm still here, healthy, and alive and well."

Not only is this amazing lady alive and well but she continues to push her body to the limits by dancing, swimming and playing soccer.

"My first few fitness competitions I did get some funny looks. I'm sure people were wondering what I thought I was doing up there. Obviously it's a physique competition and I'm missing part of my physique and I don't have the symmetry of what they are looking for.""But after I did my routine for the first time, people realised that I was an athlete just like the rest of them - and I did belong up there.""I don't know why they go as crazy as they do for me; maybe its something different." 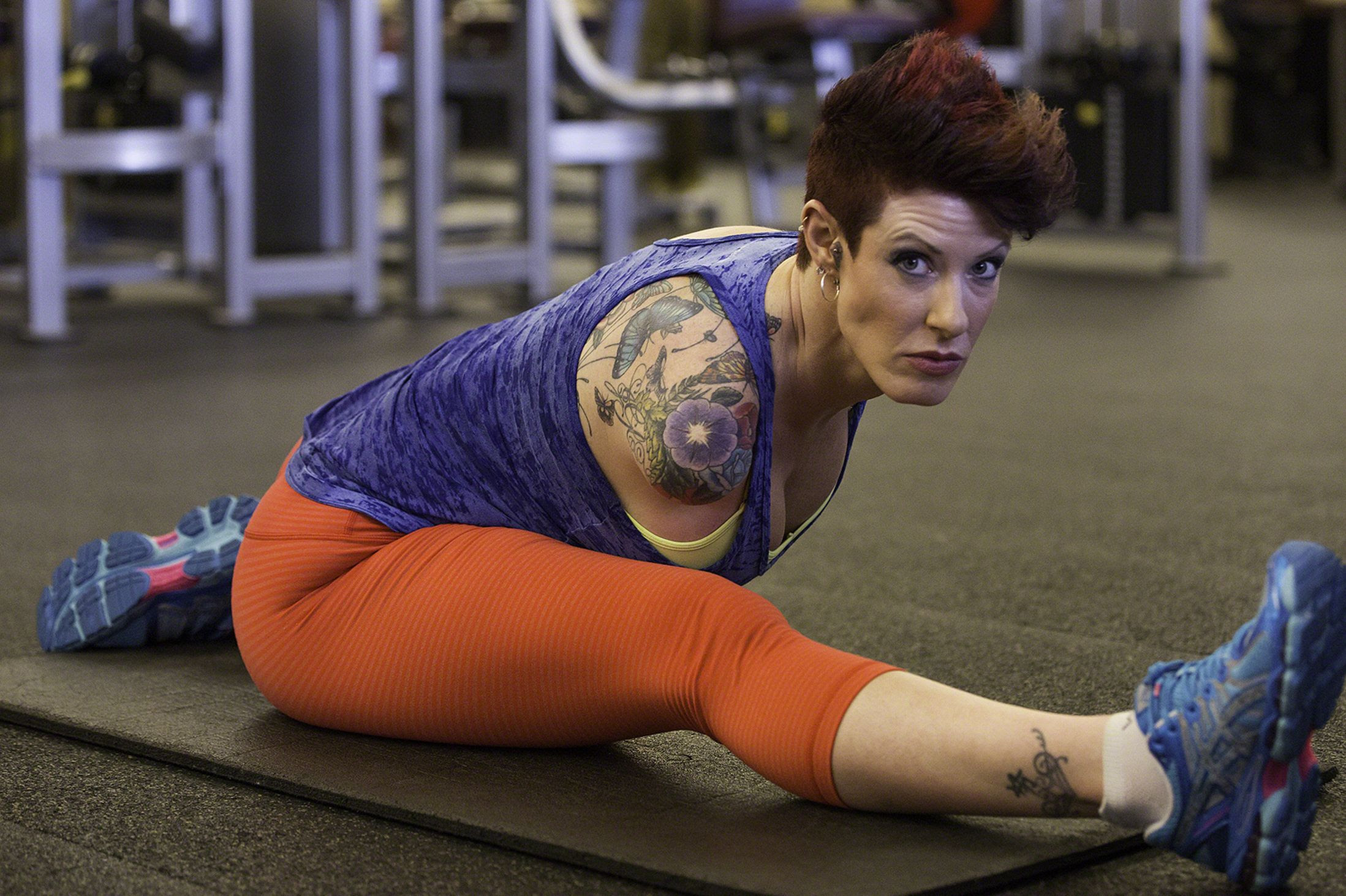 Her legs have incredible strength
So far, Thomas' greatest bodybuilding victory came in March 2012, when she came in fifth out of six competitors.
She added: 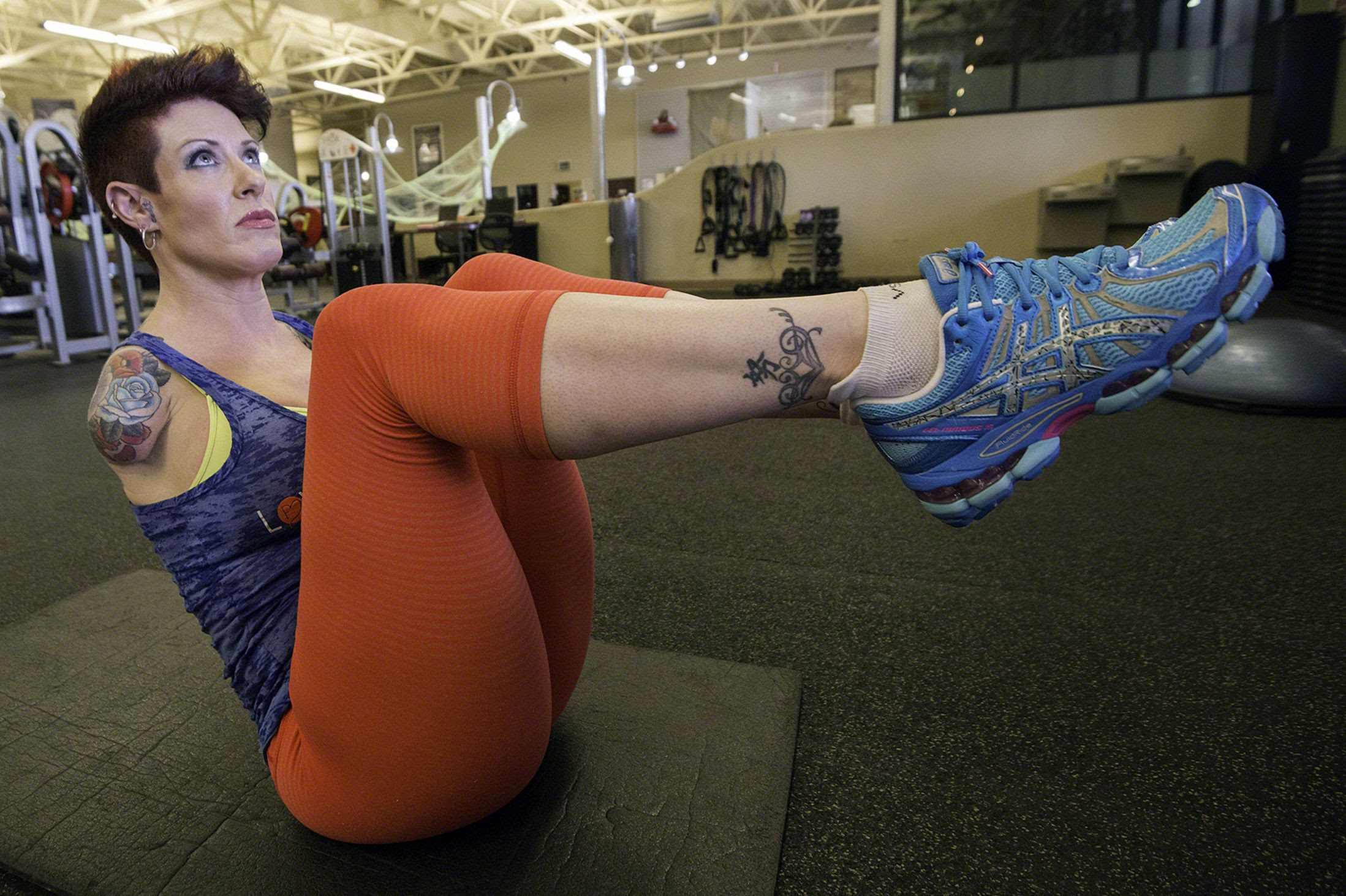 Bodybuilding gives Thomas a goal to work towards and makes her feel good about herself. Her workouts vary each day from cardio and abs to stretching and track work.
When not competing, Barbie loves doing the things a normal mum would do and enjoys looking after her two sons. Barbie gets milk from the fridge at her home in Arizona

She added:
"Yes there are the challenges and trials that come with bringing up kids. I don't think mine were any different - I just had to use my feet. But I got through it and my kids got through it."
"Sometimes I have to sit on the floor or sometimes I have to sit on the counter - but its still the same stuff you do. The mind is a really very powerful thing and so is attitude - and if you keep a really positive attitude and believe in yourself and believe that you can - then anything is possible." 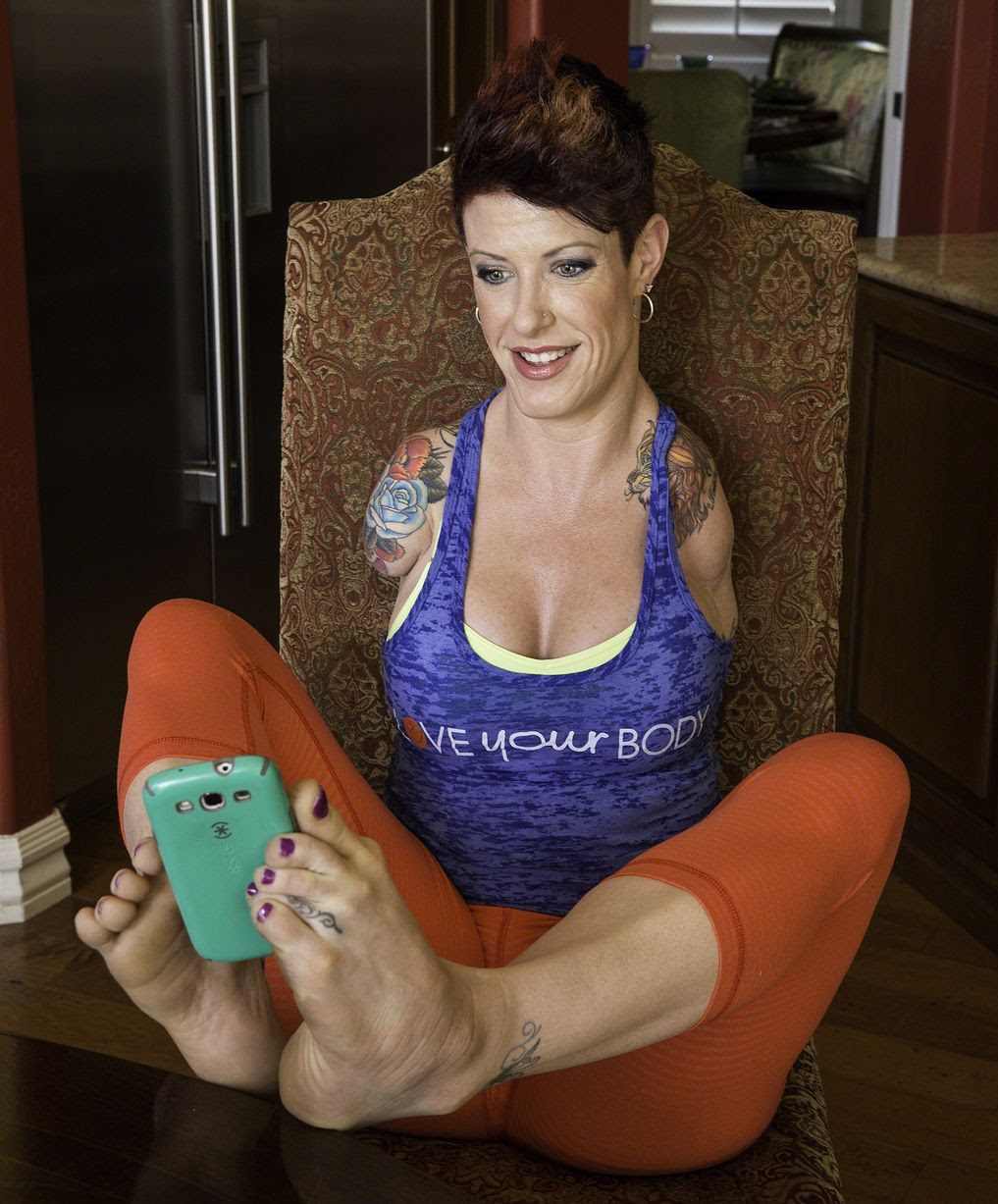 Holding the phone with the soles of her feet... 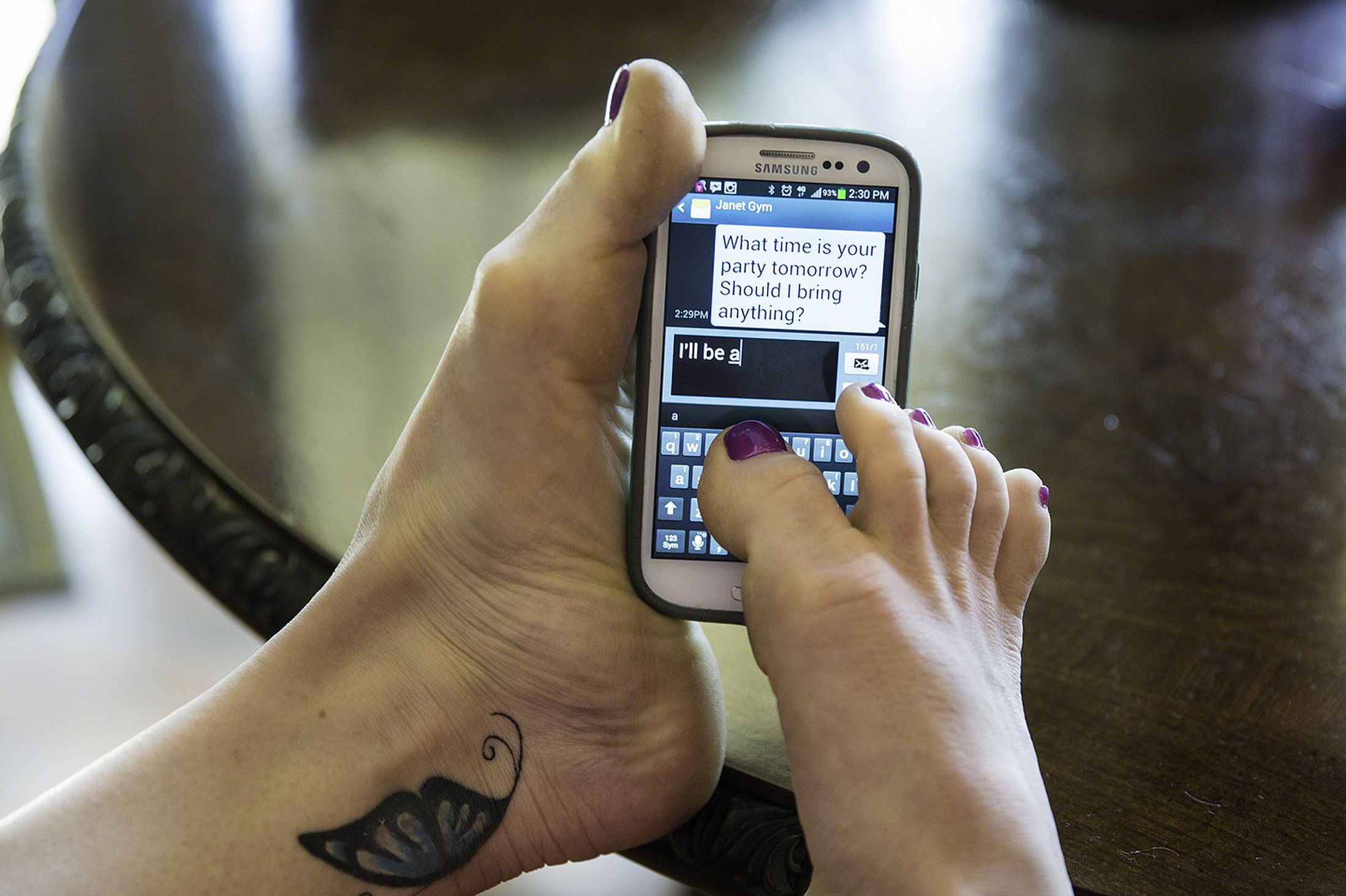 ...she texts pals with her toes

I decided to post Barbie's story to encourage everyone. This is a woman who rather than plunge into depression as made her disability work for her good. She even texts and drives!Really inspiring story. woman. 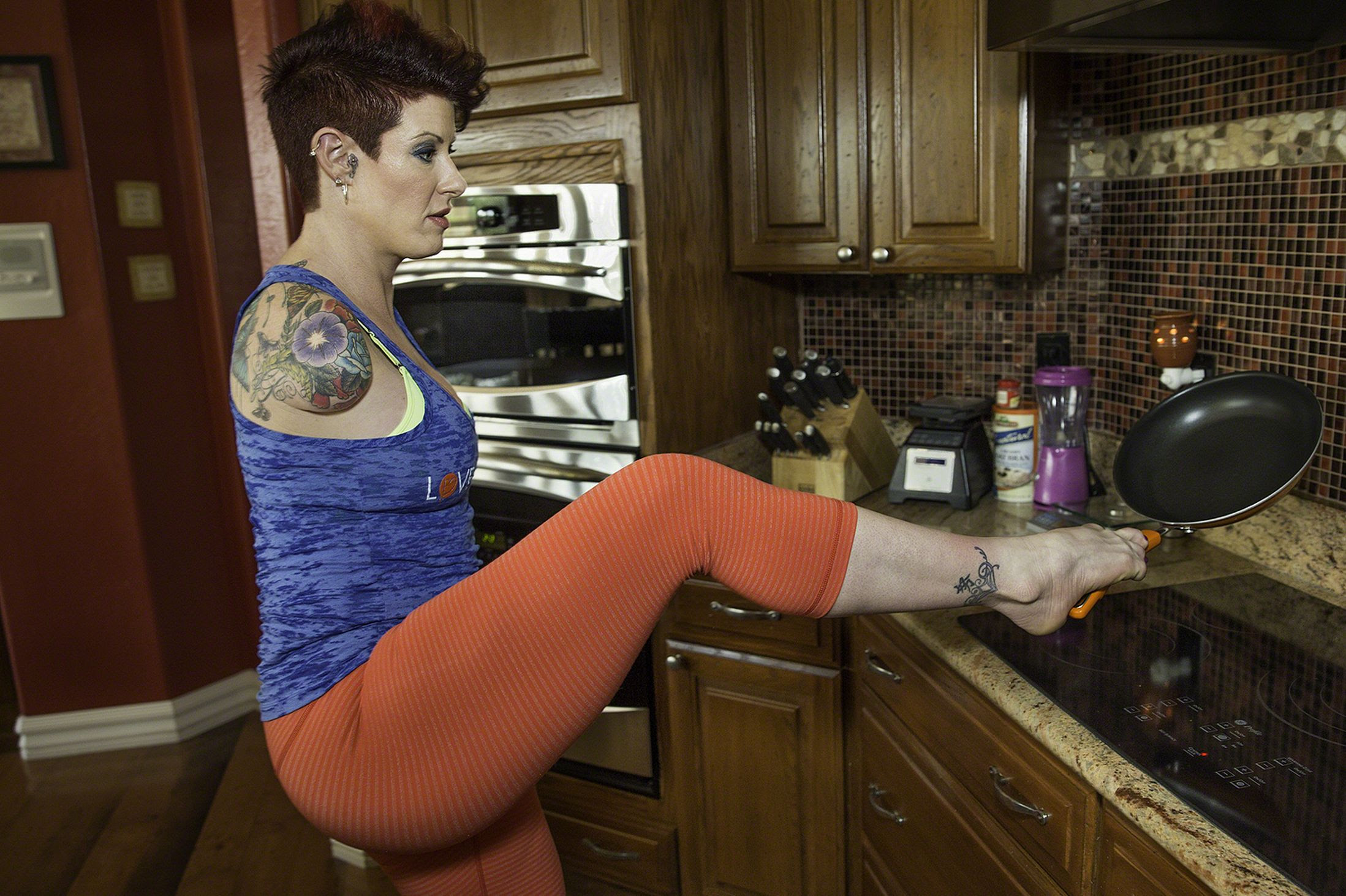 Barbie Thomas cooks up meals with her feet 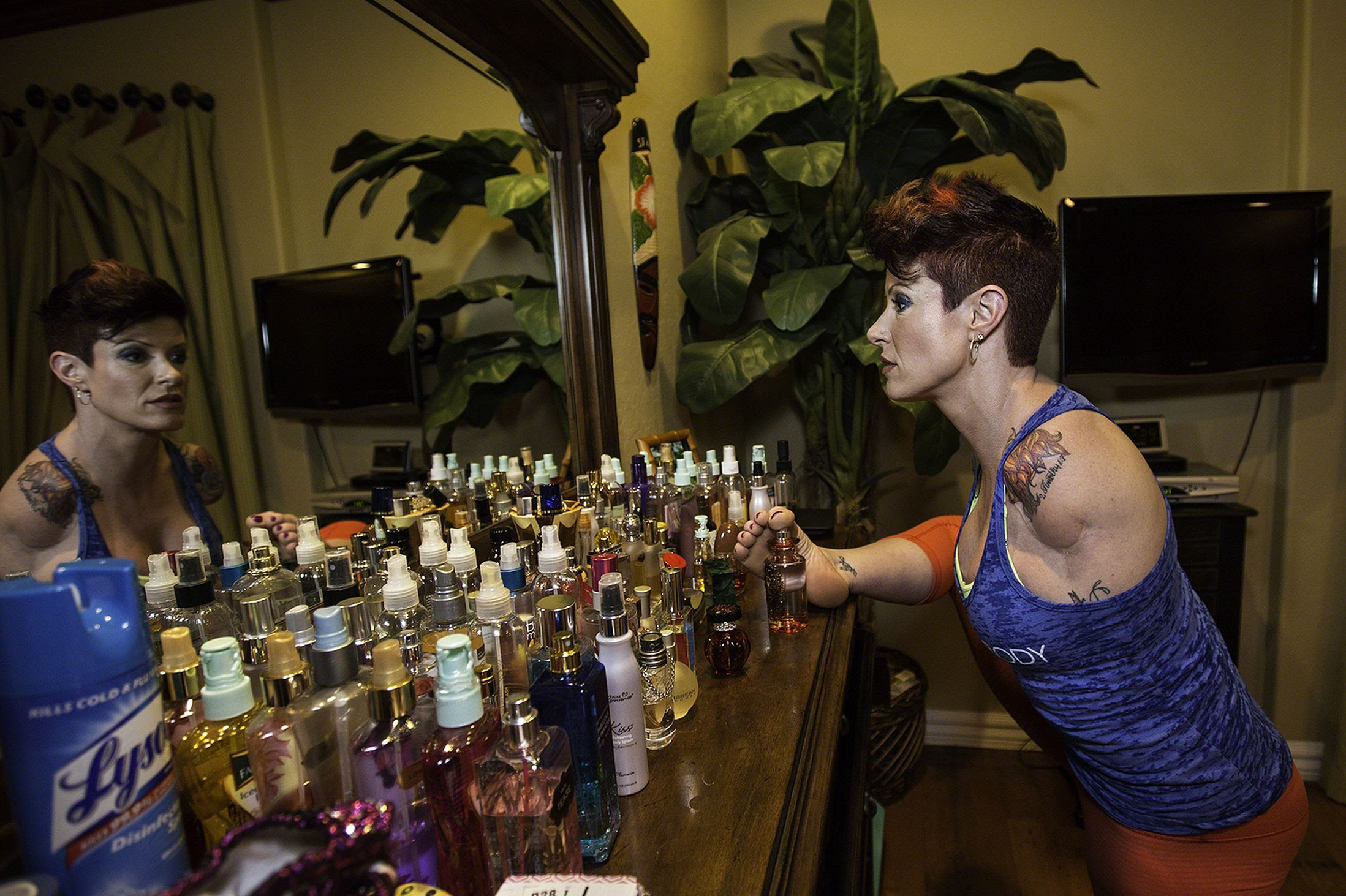 Here she puts on her makeup - again with her feet 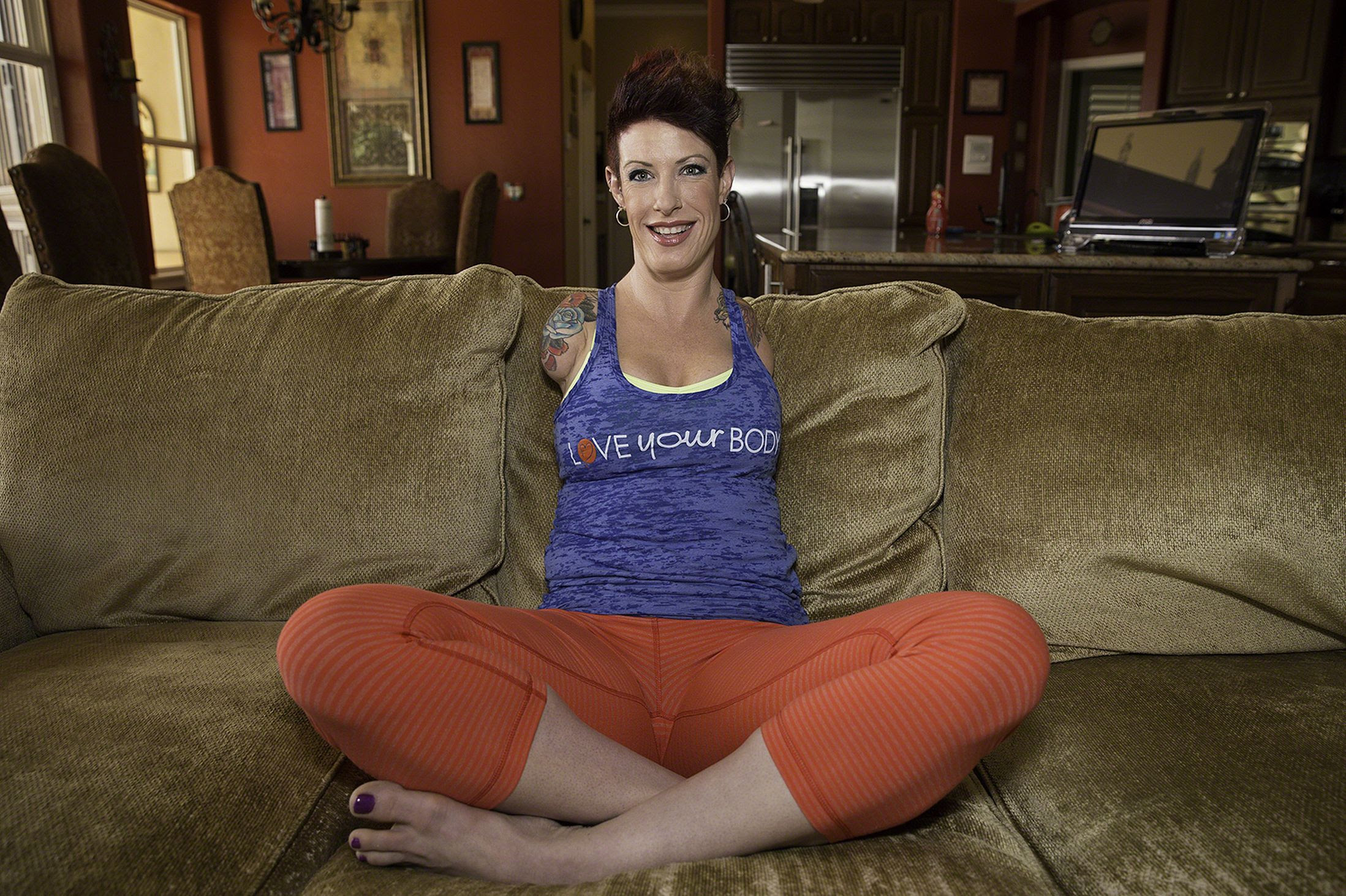