"I will never be faithful to a woman. Never ever!' - Femi Kuti says 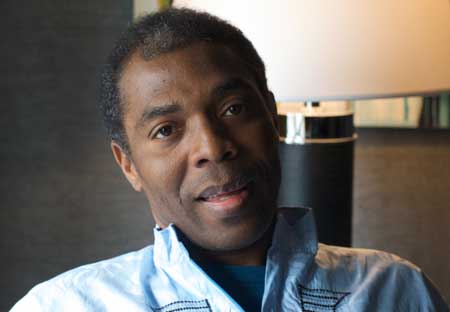 
"I will never get married again. I don't think I will ever be able to trust anybody. I will never be able to give any woman that chance. First, I will never be faithful. Never ever! I will not even try to be faithful. I won't! Because first of all, I don't even believe a woman would be faithful to me. And why does she want to be faithful to me? First, I think it's very unnatural and I can not even imagine standing somewhere and one man will say 'I pronounce you man and wife. Who are you to pronounce me man and wife? Okay, I pronounce myself man and wife. There's a girl who lives with me now. She's not as jealous as most of my other girlfriends.. She knows I like women, so we understand each other. She doesn't question me, I don't question her. She takes cares of our child, no wahala. But the minute she starts being over-jealous, we are going to start to fight. She's the kind of person that I will say, that girl is fine o, and she will say, should I chase her for you? And I will say don't worry, I can do it myself.

He said a lot more. Continue...

I don't want anybody to question me. Who are you to question my life? Have you heard any of my song questioning anybody? And every time I've tried to love, they have broken my heart. From day one - either because I'm Fela's son. I hear the parents say 'oh, you want to marry Fela's son? God forbid. Even Funk that I married, when her mother found out I was Fela's son, she scream no o! God forbid. Funke had to runaway to get pregnant o! And we ran away to get married. So, by the time she and her mother made up, of course, the marriage collapsed.

So you see, I try to be straight forward. Why should I lie? I'm popular and I now want to be sneaking from house to house or lie to my girlfriend? There's no way they won't catch me so it's better you're truthful. So I don't start a relationship with 'you are my one and only, bla bla bla. No! I like you very much but the possibility of liking someone else is there. I tell them. Even my wife Funke, I made this very clear to her. I don't start my relationship based on you are the only one, I want to marry you, you're the apple of my eyes. I start by being very truthful.
entertainment