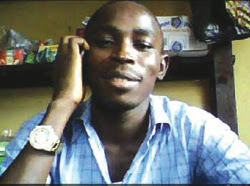 According to a report by PM News, a graduate of Architecture, Obafemi Awolowo University, Ogunsona Daniel Adekunle Adebambo (pictured above) committed suicide by hanging himself in an uncompleted storey building yesterday January 1st 2014.

According to the report, the body of the 30 year old man was found around 1 a.m. yesterday dangling from a rope tied to the hook of a fan in an uncompleted storey building at 1, Alice Ogunsona Street, Hilltop Estate, Eruwen, Ikorodu. His body was found by his younger brother after reading the suicide not he wrote and left at their home. Continue...

A resident of the Hilltop Estate who said he participated in bringing down Adebambo’s body from the ceiling, recalled that he was dead and stiff when they brought him down. "When the family raised an alarm and we came here, he was already foaming in his mouth and his hand was clenched in a fist. This signified that he struggled till he died,” he said.
state news