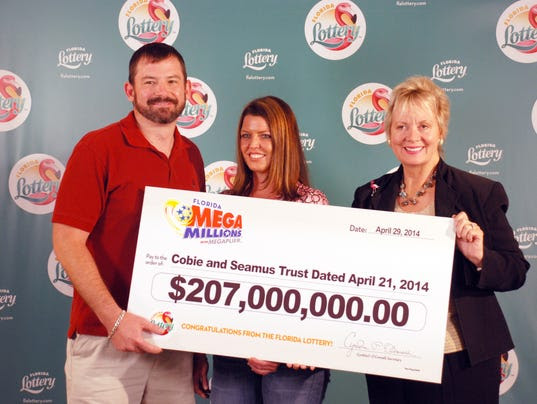 she had less than $5 cash with her when she filed for bankruptcy two years ago, but Tuesday, a Merritt Island woman held a giant novelty check for more than $200 million in lottery winnings.
Federal court documents show Robyn Ann Collier's personal property on April 30, 2012 included $4.73 "cash on hand." In February this year, her boyfriend was laid off from his job at a boat-building company, according to their attorney, David Presnick.
But in March, Collier bought a Mega Millions lottery ticket at a Sunoco gas station on South Courtenay Parkway on Merritt Island, according to a release. She and her boyfriend, Raymond Moyer, had the winning numbers.
"We didn't know we had won until the next morning when the numbers were on the news," Collier said in a release. "I paused the TV and ran to get the ticket to double check the numbers and when I realized they all matched I jumped off the couch in excitement and told Raymond we had won."
"I didn't believe her until I saw the store where we purchased the ticket on the news," Moyer said in a release. "It was definitely a shock, but it is an incredible blessing that will allow us to do many things we would not have had the opportunity to do before."
The Merritt Island winners split the $414 million jackpot with one other winner from Maryland – nobody has claimed that prize yet.
The winnings were awarded in one lump-sum payment: $115,448,968. The money was deposited in the Cobie and Seamus Trust, named after Moyer and Collier's dogs, according to Florida Lottery Spokeswoman Shelly Gerteisen. Moyer and Collier are members of the trust. Gerteisen explained that a trust is not uncommon for winners of large jackpots.
Collier said in a video that she still plans to work. Moyer said they would make investments and go traveling – he wants to take Collier to Ireland.

If you think that fortunate events can't happen to you, then you you
are wrong. I am convinced that we are all born we an equal amount of
luck. It's what we do with that luck at a certain TIME that differs
from person to person.