In the ongoing battle against career spammers, affiliate marketing companies are often a gateway for non-compliant spammers to attempt to get some quick, if fleeting, cash.

The product range many of these affiliate programs offer nearly always sound "too good to be true" but they do make them money. Career spammers essentially join, ignore any zero-tolerance policies the affiliate program has for email spamming (or any other spamming for that matter), get an affiliate id, and start up their email deployment system.

I decided to examine each of the claims this spam campaign makes, and especially the completely fake claims they make on their websites. Nearly every single statement on these websites is 100% false, and that's a big no-no pretty much anywhere in the world, but it's an especially eggregious offense in the US.

Here is a spam message I receive a few days ago from another career affiliate-progam-abusing spammer:

From: The LottoBlackbook support@thelottoblackbooksecret.com
Subject: Win a lottery everyday- Secret exposed
"They Kept Asking Me:

"How The Heck Did You Do It? What's Your Secret For Winning The Lottery?
Tell Us Or We'll Kill You" I Managed To Escape But I Got Shot In The Left Foot"

But Today, It is yours:

I was searching for a lotto PATTERN...

Winning The Lottery Is Not ROCKET Science.

Anyone can do it. That's why I decided to publish all my secrets in a book.

Wow. That is quite the story, isn't it? The protagonist of this ridiculous spam campaign, "Larry B." (on the website it links to he says he is "Larry B****" but the footer says the site is made by "Larry Blair") is so good at winning lotteries that he's receiving threats.

That might not exist for long, but if you've ever researched this type of spam you can spot it a mile away. One single, length, rambling page making a series of ridiculous or outright false claims. It's the HTML page version of a 3:30am infomercial on tv. They just repeat the same claim in numerous ways while telling an (arguably) outlandish story, then back it up with a series of "testimonials", which are also very easily proven to be false.

Here's the first thing you see when you visit this site: 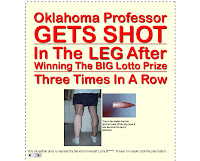 Again I have to say: wow.


80 point masthead type shouting out "Oklahoma professor gets shot in the leg after winning the big lotto prize".

Before I dive into this particular site, let's just get a feeling for how many of these websites are out there. I did a quick google search for that first line and Google (as of this writing) returned "About 320,000 results" for that phrase with no quotation marks around it. If I add quotation marks, which looks for that exact phrase, it returns "about 10,200 results". So this site is not unique at all. Keeping in mind that it's also pulling up sites which ridicule this product - possibly this very website as well - the majority of the results are actually trying to sell you the Lotto Blackbook product.

A little further down, it claims that this is one of the people who shot him in the leg in order to gain his "secret" about winning lotteries.


"They Kept Asking Me:
"How The Heck Did You Do It? What's Your Secret For Winning The Lottery? Tell Us Or We'll Kill You…"
…I Managed To Escape But I Got Shot In The Left Foot"

Here is the robot portrait of one of the aggressors. it's the same picture that was presented to the police. They were never apprehended..."

It shows a police sketch:

Anyone can easily disprove this. A simple reverse image search (Thanks Tineye and Google!) shows that this is actually a police sketch of a crimnal wanted in Tennessee and Alabama for a string of armed robberies at check cashing facilities in several counties in that area:

You'll notice that there is absolutely no mention of shooting anyone in the leg in order to expose "lottery secrets".

It doesn't appear that he was caught, but it seems unlikely that the story would fail to mention that he shot someone in the leg. We can file this detail under "unlikely".

The writing about this (probably) completely fake scenario is written with way too much melodramatic flair. ("All you think about is your wife and children..." - so true, man... so... true.)

After an awful lot of copy about how he felt "blessed" for having his lotto-winning "secret" and claiming to donate it to charity, the story continues that he had to use a lot of paper and books for his research, and that his wife was concerned, and took a photo of what he claims was his desk:

That image is easily recognizable to a select batch of online nerds as being the winning entry to the 1999 "messy desk contest" which was held, at that time, at a site called bash.org:

That can be found on this page:

The original contest is of course long gone. If you search for that image (thanks again Google) you get "About 9,370 results". So again: not at all a rare image. Is it our lotto-secret-wielding hero? Again: filing that under "unlikely".

Further still, an image that he claims is of him "winning" his first lottery, after trying his alleged theory for 8 years:

That photo is actually a picture of December 2006 Powerball winner Michael Anderson:

Wait - Michael Anderson? That doesn't even rhyme with the name "Larry B." So that's basically just an outright lie.

But did Michael Anderson use some hidden secret method to win his prize? The story doesn't say.

So let's look a little further down:

Google searching for that image, unfortunately, only turns up results of competing "lotto blackbook" websites. But if you look closely it doesn't appear to be the same person.

So let's talk about his so-called testimonials:

The first image shows someone he refers to as "Alain M."


Larry, Thanks to your system, I managed to give up my day job. Now all day long I’m preparing for the weekend lotto drawings. This is the big prize I won. Sometimes I get a couple of thousand, sometimes hundreds … but one thing is for sure: I won almost every time.


Again a very simple search turns up this story:

The name of this winner is actually Alain San Giorgio, not Alain M. (Another outright lie.)

How did Alain actually win? Let's search for that too:

When asked by Virginia Lottery officials how it happened, he replied simply, "I'm just lucky, that's all."

The winning numbers for that drawing were 4-8-20-22-34. He selected the numbers on his ticket at random.

Now: Alain might be trying to hide the so-called secret method Larry over here is talking about, but you would think we would have heard of him winning numerous times, since this is the claim made on the Lotto Black Book site. There is no mention.

Let me add that when a person wins the lottery, if they want to accept the money they have to give the lottery the right to use their name, their likeness and other identifying elements to promote the lottery. If Mr. San Giorgio actually had won the lottery that many times, there would be several press releases from the lotteries all saying so.

You would also see a series of personal interest stories in several newspapers commentingon how unlikely it was that such a person could win so many lotteries all the time. But in this case: zero.

So: another outright lie.

A companion site mentioned in the footer of this website - thelottoblackbook.com - features most of the same claims and testimonials, but also references just such a news story. They only show a screen grab of the story, but don't link to it:

The story is about a person named Joan R. Ginther

Three of her wins, all in two-year intervals, were by scratch-off tickets bought at the same mini mart in the town of Bishop.

Mr Rich details the myriad ways in which Ms Ginther could have gamed the system - including the fact that she may have figured out the algorithm that determines where a winner is placed in each run of scratch-off tickets.

This entire time this website has been claiming that it will teach you how to beat lotteries like the Powerball, a lottery where a series of winning numbers are pulled completely at random, and tickets are purchased which have user-selected numbers on them.

Scratch tickets don't work that way. They are pre-printed and have serial numbers, and there are numerous stores of people who have foiled these systems. The two systems are completely different.

The site again claims that this person shared the same Lotto Blackbook method for winning lotteries, but the real article about Ms. Ginther states otherwise.

In short: it's really easy to assume a product is a scam in the first place, but when the websites promoting them (and the spam messages promoting the websites) are so chock-full of such easily disproven lies, it's time to question why the FTC and other consumer protection organizations haven't gone after companies like this one.

Of course he only receives payment via PayPal, so attempting to get your money back from this scam operation is probably a laborious and potentially fruitless exercise.

As usual it's up to the consumers themselves to be cautious about any claims a website makes - especially one promoted via unsolicited non-CAN-SPAM-compliant spamming - and I would hope this single posting provides enough proof that consumers should probably assume that any claim made by a spamvertised website is likely to be an outright fabrication.

My advice: If a company is lying to you once, you shouldn't waste your money on them. But if they lie to you numerous times like this one is? Not only should you never send them your money, the company behind these fraudulent spamvertisements should be completely shut down. That should be obvious to anybody.

Here are some links to discussions which debunk this obviously fraudulent operation:

source : lottoguy.net
leave comment  below if you have similar stories
Gambling